My experience with Low Dose Naltrexone By David Gluck, MD 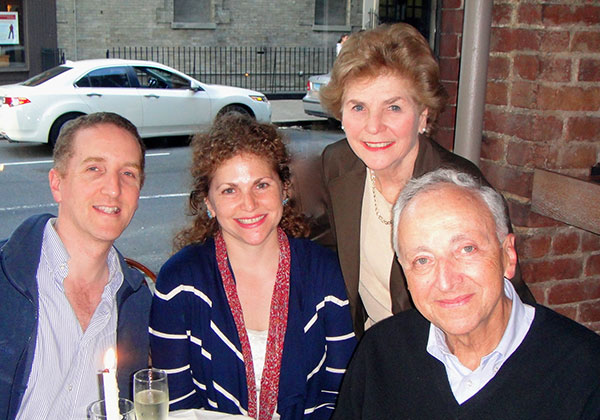 When I was in the 5th grade of a public school in New York City in the 1940’s, a new boy arrived in our class. He was obviously a very brilliant kid (and someone who was promptly treated as a “nerd” or a “geek by my friends). Bernard Bihari’s new home was only a block away from mine, so we would walk to and from school together, and a friendship was established.

During college, we both decided to take pre-medical courses; Bernie was accepted at Harvard Medical School and I went to Cornell Med. We managed to keep in touch from time to time.

In the mid-1980’s, Bernie told me of his amazing therapeutic discovery, which he felt to be an answer to a serious disease that was then just emerging, something that was spreading mainly among homosexual men – it appeared to be destroying their immune system. The treatment he found was just a very small off-label dosage (1.5mg to 4.5mg each night) of a drug called naltrexone, which had been FDA-approved a year or two before (at 50mg daily) in order to treat people who had a heroin addiction. Naltrexone was a pure antagonist to narcotics.

Over the years, Bernie found that low dose naltrexone (LDN) had a much wider use than for what became known as HIV/AIDS. In his private practice, he began to see people with a variety of cancers as well as those with a host of different autoimmune diseases, many of whom appeared to benefit from the use of LDN.

By that time, I had been a Board-certified specialist in both Internal Medicine and Preventive Medicine for many years, and the possibility of easily treating or preventing such a broad scope of serious diseases so easily and effectively struck me as something worth shouting from the rooftops! Little did I suspect that, for an array of reasons, the professionals in the fields of medicine, and government, and in pharmaceutical companies were not at all eager to explore the possibilities of this new advance.

In 1999, after years of trying in vain to find supporters for LDN research, my son Joel and I determined to set up a website to tell the world about it; it is called www.lowdosenaltrexone.org. Not long thereafter, Joel arranged for the creation of the LDN-Yahoo Group, which is free and which one can easily join right on the website’s home page. There are currently about 11,000 members of the Group, and most of them are anxious to assist others who have any questions about LDN use.

Sometime in 2001, I decided to begin taking LDN 4.5mg nightly myself, on a preventive basis. I have continued to do so ever since, as have a large group of immediate family members and friends. No one has reported any untoward side effects, and the results have been very interesting: without exception, we have all noted a marked decline in our incidence of common colds – which appear to have dropped a good 85%! It also became clear that any serious stressor, either physical or emotional, could quickly impair the protective effects of LDN until the problems were resolved.

By 2005, we realized that there was enough growing interest in LDN to permit our arranging the First Annual LDN Conference, which was held at the New York Academy of Sciences. Over the next three years, similar annual conferences were organized in locations around the USA. There was also a special conference in 2007 at the National Cancer Institute, which included only researchers with special interest in LDN. [ See: www.lowdosenaltrexone.org/events.htm]. My experience with these meetings persuaded me that the main goal for advocates of LDN ought to be the attainment of FDA approval for its special new uses; and the best road to that goal surely lay in further research.

When, after a series of unfortunate accidents and related medical problems, Bernard Bihari, MD, died in 2010, I lost a lifelong friend and the world lost a brilliant and caring physician. It has become that more compelling to achieve well-deserved recognition for his great discovery.

I recently was asked to write an article about low dose naltrexone for a USA magazine called Natural Solutions. The editor planned it to be a response to a person with an autoimmune disease, who is wondering about possibly using LDN. Here is that piece, with a few minor modifications. It contains  the sort of information that might be useful for any new potential user of LDN:

“Low-dose naltrexone (LDN) is just an off-label use of the FDA-approved drug naltrexone. Any physician can write the prescription for you. Rather than the original 50mg daily of naltrexone for those addicted to narcotics or alcohol, LDN is used at doses no higher than 4.5mg (nor lower than 1.5mg) and is generally taken at bedtime.

The major mechanism of action of LDN involves blocking the body’s opioid/narcotic receptors for just a very few hours (rather than the all-day blockade caused by the 50mg dosage). Those are the same receptors used by the body’s endorphins. The body responds to this by greatly increasing its endorphin production, and those higher levels last all day -- far after the blockade by LDN has ended. Endorphins turn out to be the major normalizer/upregulator of one’s immune system.

We have already noted positive benefits from LDN in those with HIV, any autoimmune disorder, many cancers, Parkinson’s disease, motor neuron diseases (such as ALS), COPD, and in childhood autism.

LDN has been especially popular for a great number of people who suffer from MS because it is beneficial in a high percentage of patients and it is the antithesis of the spectrum of “approved” anti-MS medications, which are questionably effective, often painful and problematic to use, are sometimes dangerous, and are always expensive. LDN, in contrast, is almost always effective, easy to use, non-toxic, easily affordable and it has virtually no significant side effects.

Because naltrexone has been a generic drug for many years now, no large pharmaceutical company will invest any money in the large research costs needed to gain FDA approval of these special new off-label uses of the medication. No one makes any significant money from sales of LDN! Nonetheless, there have been many small clinical studies of LDN performed at outstanding medical centers, all showing it to be safe and effective. Check my website for detailed information on the research [www.ldninfo.org/ldn_trials.htm].

In MS alone, there have been two very promising studies. One, out of a group of hospitals in Milan, Italy, showed that of some 40 patients with Primary Progressive MS (for which there is NO recognized treatment) who were treated with LDN over a period of 6 months, only one patient showed any sign of progression! The other study, performed by one of the best neurology departments in the USA, at UCSF, was very brief, but showed that within 8 weeks of LDN treatment there were already statistically positive improvements.

There are only two substantial contraindications to LDN’s use. The first is that the potential user must not be dependent on daily narcotic-containing pain medications. Remember that naltrexone is a pure opioid antagonist, so even one little capsule of LDN taken by such a person might well lead to a prompt and dangerous withdrawal reaction. The other contraindication is based on a supposition: we believe that anyone who has had an organ transplant, and thus must take daily immunosuppressant medications, ought not start using LDN, which reliably strengthens one’s immune system.

Use of LDN is generally compatible with all other treatments or medications, with these few caveats:

Because LDN is a prescription drug that is made by compounding pharmacies, and because there is a rather high rate of error in compounding the occasional drug, I strongly recommend using only compounders that are recognized for their expertise in compounding effective supplies of LDN. On my website’s home page [www.ldninfo.org], there is a list of pharmacies in the USA, Canada, and the UK, highly recommended for LDN, which have proven themselves over many years. They all ship it to you promptly and are inexpensive.

In summary, if you have one of the many diseases that have been reported as benefiting from LDN and have neither of the improbable contraindications that I’ve noted above, then by all means, why not consider getting started on LDN.”