I was diagnosed with multiple sclerosis (MS) in August 2000 at the age of 44, but my MS can now be traced back to when I was 32 or younger.

I have relapsing/remitting MS and was having attacks every 6 months; it took months for a relapse to recede, only to have another one start. In October 2003 I was told I had secondary progressive MS and there was nothing anyone could do to help me. 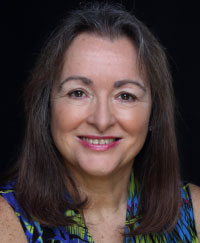 I decided to take matters into my own hands, and started LDN in December 2003. On my next check-up at the hospital in February 2004, I was told I didn't have secondary progressive MS, but was in fact still relapsing/remitting. LDN has helped me with fatigue, restless legs, bladder, bowel, burning legs, leg strength, tingling in feet, sleeping and 'fog in the head'. I now have a better quality of life and hope for the future.

I wanted everyone to hear about LDN as a treatment option.  I'm not saying it would work for everyone, but it is worth looking into. The LDN Research Trust became a UK registered charity in 2004 and has gone from strength to strength.

I’m Linda Elsegood, and after months of being asked, this is the first time I have written my MS/LDN ‘story‘. Perhaps thinking that it was so incredible, I guess I didn’t want to tempt Fate, but here goes.

In 1969 at the age of 13, I had glandular fever (Epstein-Barr virus). I was seriously ill and away from school for six months. After that, strange things started to happen to me: trapped nerves here and there, slipped discs... You know how the story goes.

Christmas 1999 my mother had a serious heart attack and the trauma affected me badly. I was working full time, travelling two and a half hours every day AND running the home.

January 2000 I had a bad bout of ‘flu' resulting in two weeks off work, then followed gastroenteritis. I was already at a low ebb, and it took me three weeks to recover. I had a tooth abscess resulting in having a good tooth out. I apparently slipped a disc causing pins and needles in my right leg. My energy levels were falling rapidly: I was finding it hard to cope and I had to sleep so much.

Easter 2000 I decided I had to break this cycle of ill health. I took a week off work and with my younger daughter, Laura, went to Portugal. The day before leaving I felt I had burnt my tongue on the left hand side. I thought I had eaten something like hot melted cheese but could not remember. Portugal was unbelievably wet, cold and windy: the wind made the left hand side of my face numb with pins and needles. Back home I went to see my GP, who thought I had a trapped nerve in my neck. He said I should see a neurologist. The earliest appointment was August. I worked for three weeks, managing the drive into work, giving one hundred per cent while there, driving home and going straight to bed.

In May 2000 my eyesight began to play up. I went to see the optician, who said nothing was wrong. Two days later, to my horror, I had developed double-vision. I had no choice but to listen to my body and stop work. Over the next few weeks I lost my balance; and the left side of my face, head, tongue and nose were numb with pins and needles. When trying to stand up I either fainted or fell over. I lost one hundred per cent of the hearing in my left ear. Every day I lost some ability: the pains and fog in my head were terrible. I slept twenty hours a day.  The only saving grace was when I was asleep I felt nothing. At this point I was really too ill to care. I had a three day course of IV steroids: these did nothing for me at all. I had an MRI scan, lumber puncture and twenty eight blood tests. I developed optic neuritis: it was feared I might lose my sight and hearing. Six weeks later I was given another course of IV steroids and I began to feel a little better. MS was then diagnosed. The company doctor at work said I had completely ‘crashed’ and no one knew if I would ever function properly again. I spent the next year mainly in bed. I was having an attack every six months or so and it was taking months to get over an attack, only to have another. My husband, Marcus, had to learn, after twenty six years of marriage, how to iron and cook, both of which he now does very well.

In August 2002 the company doctor gave me a thorough examination and reported back that I was unemployable for the foreseeable future. Being a workaholic I was dumbstruck. Getting back to work was my goal.

In February 2003 I was assessed to go on the interferon trials. In my heart of hearts I didn’t want to do this, but my family thought it was the only thing available to help me. On the Expanded Disability Status Scale (EDSS) I scored 2.5, which I was told was very good. I then had the scale explained. 0 was fit for someone with MS: 10 you were dead... So at forty six I was a quarter dead. Wonderful.  I started taking Rebif in March 2003. The first liver function test I had was over the acceptable level. The results of each successive test were higher than the last.  I was told to carry on taking it. My health was such that ‘10’ was getting closer all the time. I had to use a wheelchair more and more often, and even bought an electric scooter. The toilet and the bed became my best friends.

In September 2003 my elder daughter, Sara, got married, and I doubted whether I could attend the ceremony. After getting showered and dressed I had so little energy left that all I wanted to do was go back to bed. I did struggle to get there, but came home as soon as I could. This didn’t hurt just me.

By October 2003 I was falling to pieces. Always in hospital seeing a urologist, a gynaecologist, and a gastroenterologist. My health was such that my GP thought I would only score 6 on the EDSS scale. I saw the neurologist at the end of the month and he thought I had ‘progressed’ from relapsing and remitting to secondary progressive. There was nothing more that could be done. No Plan B.

I had had enough of our health system by November 2003. I was so worried over how I would be in a few months that I couldn’t even think of the next year. I was deteriorating rapidly and things I could do one week I was unable to do the next. ‘Normal’ was becoming weaker and weaker. I had read a lot about LDN and I contacted Dr Lawrence. I stopped Rebif and Provigil and started a special diet plus a regime of vitamins and supplements. I discussed LDN with my GP and she - I had a new one - agreed to monitor me. The results of liver function tests were so high that I was worried what LDN would do to me.

In early December 2003 I started LDN, and the results were amazing. By Christmas I was functioning again, and the liver tests were back to normal. I felt like ‘me’ again, OK a me with MS, but that didn’t matter.

In February 2004 I had to be assessed again on the EDSS scale. The deal when I started the interferon was that I was to be monitored for ten years, even though I had by now stopped taking it. I scored a magnificent 0, even though the neurologist wouldn’t recognise that it might have something to do with LDN, although that is all I am taking. It was confirmed that I was still relapsing and remitting and simply ‘in remission’!

Thanks to LDN and Dr Lawrence, I have a life again, and hope for the future. I can plan things AND do them. I founded the LDN Research Trust in May 2004. It is the most exciting thing I have ever done. I am able to give many hours a week to the Trust, helping people to get LDN and trying to get it into clinical trials. My head is clear, energy levels up, greater muscle strength. Balance, vision, hearing, bowels and bladder are good.

Severe pain in the head, optic neuritis, double vision, fog in the head, and loss of hearing in the left ear.

To sum up, I know I have MS and I haven’t been cured. I’m not back to the old me, but if I can remain like I am now I will be more than happy. March 2005 I was re-assessed on the EDSS scale and achieved another  0.

Throughout the last year I have had no relapse.

March 2008, no further relapses or decline.